The potential gains from large stakes make it appealing to commit substantial time to the Numerai project. On the other hand, exchange rate volatility between NMR and USD / GBP makes it unappealing to commit large stakes. If stakes (and, ideally, payouts) could be done in one (or more) fiat-pegged currencies, I think that would encourage more people to participate and stake substantially.
As an aside, about the philosophy of the payout system: What does Numerai-the-hedge-fund-manager gain from users committing large stakes, and hence earning more? Numerai gets the same predictions whether they’re staked with 1 NMR or 1000…

Upon further reflection, the economics obviously don’t work. The only way numerai can pay as handsomely as they do is because the payments come from a pot of tokens that were created at no cost (for the tokens themselves; obviously the ecosystem cost some money to develop). Presumably if we were staking and receiving fiat, the returns would be much, much lower.

On the other hand, there might be a way to make the competition harder, so that burns and losses are approximately equal, and the burns are paid to the winners. I haven’t really thought that through, but it would presumably get slightly more cutthroat around here

I think the fundamental issue is that so long as NMR is completely disconnected from the actual performance of the fund it has no fundamental value aside from its ability to be used to earn more NMR.

NMR is being used to earn dollars, meaning that is should have a real fundamental value, but that usage is only by numerai (by paying NMR for stock predictions which they turn into dollars). For everyone else, NMR is just a means to earn more NMR, and because numerai has what is, practically speaking, an unlimited supply of free NMR, they don’t actually ever buy NMR with their dollar gains and create demand.

A buyback from the fund based on the fund results would be an affordable way to keep things as they are but introduce dollar based demand for NMR into the system and I think is the simplest solution to the problem. I wrote up a proposal here: Leaderboard Bonus Replacement -- Metamodel peformanced based NMR buyback

For comparison, a token like BNB has a direct connection back to dollars because at a fundamental level it is redeemable to pay binance fees (which otherwise would have to be paid in dollars/btc). Binance is the only entity collecting fees in dollars in the BNB ecospace but they tie the currency back to their core business model (denominated in dollars/btc) by ensuring that anyone who has to pay dollar dominated fees would want to buy BNB, thus providing price stability and effective sharing some of their dollar fee earnings with BNB holders who elect to sell their BNB.

Numerai needs to do the same and directly connect their core business model to the demand for NMR. Currently the connection between NMR and dollars is complete isolated to numerai and there is no tie-back to NMR holders.

Of course the other option is to do what they used to and pay a portion of tournament rewards in $, that would solve the problem too.

Isn’t this concerning? What would happen if someone with a “big” fortune in NMRs wants to retire, he/she has to wait until other participants buy the tokens?

Also, numerai is “creating” the tokens and therefore getting money for them, but the day people want to leave, to make their money real, depends completely on other people wanting to buy? (and selling them before numerai produces and sells more tokens).

I don’t understand the cryptocurrency world and I hope these are stupid concerns because I aspire to get models working and stake on them. I am not that interested in the crypto part (data science and finance are already big enough to learn), could someone with crypto-knowledge please alleviate these concerns?

I had a similar question.
Immagine one of the users with high number of NMRs retires, and assume there is no problem for him to sell his NMRs back to USD. What I think would happen is that the value of NMRs would sink down, and all the people who joined the tournament “more recently” when the price of NMRs was already “high enough” would find themself with their investment decimated, even if their model was always having positive return.

Shouldn’t this be concerning for the future of the tournament?

What does Numerai-the-hedge-fund-manager gain from users committing large stakes, and hence earning more? Numerai gets the same predictions whether they’re staked with 1 NMR or 1000…

I think that it mostly stems from a financial “skin in the game” type ethos, where the “skin” is measured by money or its equivalents. It can lead to odd valuations—look at the art market, as a classic example of that. The problem arises because the value of “skin” is different for different people; $8M a while back seemed a quite reasonable price for a dead shark in a tank to a certain multi-billionaire; given my net worth my equivalent might be springing for a dinner out for the extended family.

FWIW, I’m here for the math, and I quite appreciate the work Numerai has put in to give me interesting problems to work on. So if they can benefit in some way from that, then, I’m content, it seems like a fair exchange.

I started quite excited about all this (as an interesting challenge that would allow me to make money by applying a hard effort), but all this NMR plus payout scheme do not fully click for me.

With the current scheme, a lot of money is being printed: 50% of the 17M$ stake every 3 months on average.

All that said I’m still excited about this tournament, but maybe I should be a bit less, more realistically excited.

And what I’m trying here is to get something that allows me to trust this system to put money and a lot of time in it … or just assume that both can be gone in a moment?

And what I’m trying here is to get something that allows me to trust this system to put money and a lot of time in it … or just assume that both can be gone in a moment?

Personally, I wouldn’t put any money into the competition unless you were prepared to lose it all. Numerai may not succeed in their mission and then NMR could be worthless. I imagine many of the stakers with ‘big money’ in the game purchased their NMR when it cost a lot less or were given them free in an airdrop. Or maybe they just have a bigger appetite for risk…

Eventually, payouts will drop because of the planned payout decrease and I believe the long-term plan is for Numerai to buy-back NMR from the open market, using profits from the fund, to pay competitors - this adds tangible value to the token.

I stumbled across this in the docs, it’s an API that returns some stats about NMR

Assuming that no one stakes any more NMR and no one unstakes any either (these assumptions are a little weak), if we had a 50% return each quarter (before payout factor) the treasury would run dry in 2030. 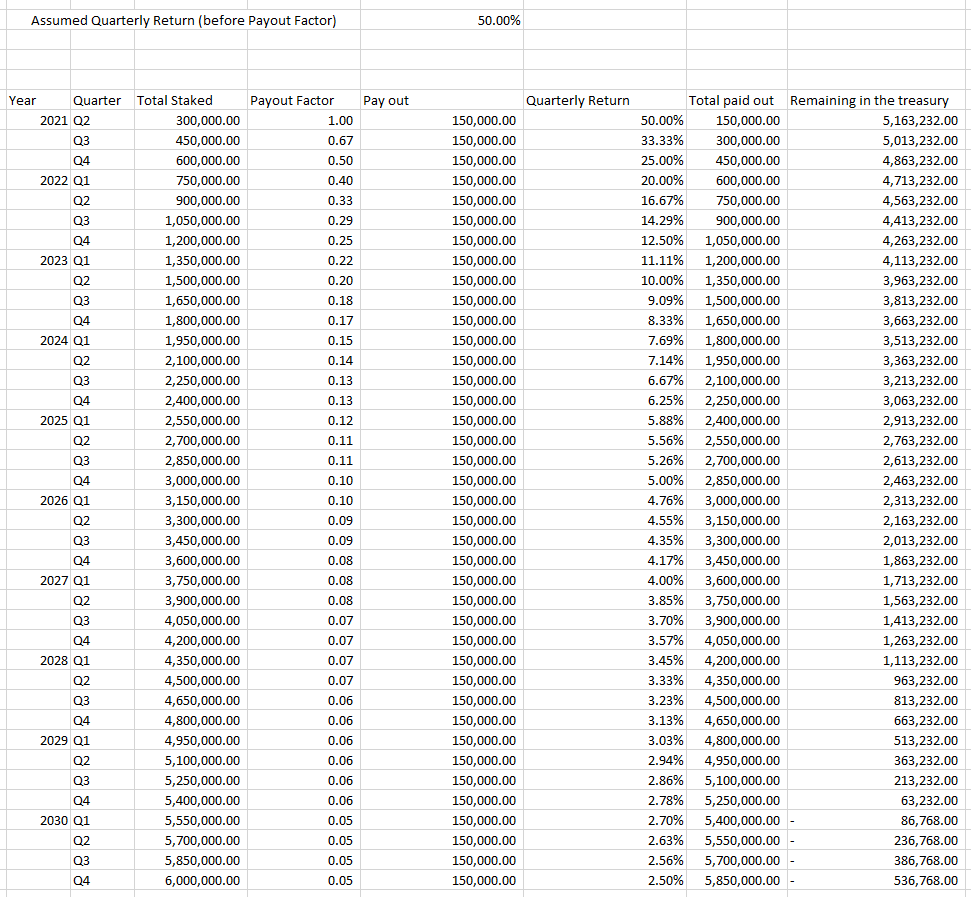 Realistically though, seems unlikely we’re going to average 50% every quarter and note that the payout factor is going to damp our returns down to more realistic amounts. And if we are burning through the treasury too fast looks like the Numerai team will have plenty of time to react.

It’s also quite interesting that assuming a constant quarterly return, the amount of NMR paid out is constant (I guess this is obvious when you think about the math). This holds when we’re above the 300,000 NMR threshold, so the amount paid out is independent of the amount staked (hence why I striked through my assumption above as it doesn’t affect the model). So it doesn’t really matter for the health of the treasury if lots of new users continue to join and stake.