When we released Metamodel Contribution (MMC) earlier this year, we said it was a test run to see how users respond before we begin payouts for it. During our observation and experimentation period, we devised a slightly different version of MMC.

The original MMC formulation essentially takes the stake-weighted metamodel, and then tries removing each user from it and seeing how much it hurts the metamodel.

The new MMC will residualize your predictions to the stake-weighted-metamodel, and then score the resultant vector against kazutsugi.

A way to think about it is like we are taking your signal, removing the part of the signal that can be accounted for by the stake-weighted-metamodel signal, and then scoring what is left over.

This diagram helps visualize what this neutralization/residualization operation does.

The User and the Metamodel are in a very similar direction, so when you neutralize the user to the metamodel, you are left with only the independent component of the user’s predictions, and the vector has much smaller magnitude than the original predictions

Some code and demonstration of using neutralization in other ways can be found at https://github.com/numerai/example-scripts/blob/master/analysis_and_tips.ipynb (near the end. function: normalize_and_neutralize).

The idea of neutralization is very powerful for MMC because you can see exactly what makes your prediction unique and you can test if that unique quality is good very directly. But we hope that some of the more advanced users will be able to take this tool and find other interesting ways to train models even for focus on the main tournament as well. For instance, you could try neutralizing the targets to your predictions, and then train a whole new model which will be independent of your first model! You can tweak the proportion parameter so that you’re only 50% neutral to certain factors. So many options out there that we hope you all can explore. We can’t wait to see the results of your experimentation.

So with the optional Feature Neutral Target, how does that work? What’s optional about it – we would be choosing which target our predictions are to be scored against? (I would think the FNT would be at a disadvantage there in terms of head-to-head raw scores generated by models trained on usual target even if the FNT predictions are more useful to you.)

You’re still scored on regular targets in the main tournament, and mmc will be scored on feature neutral targets. You just choose if you want to use the new targets to supplement your training or not.

Feature neutral targets may be at a disadvantage in some ways, but they should be lower risk as well, given less simple exposures. You may see lower returns but higher sharpe in your tests.

It’s also worth considering if you think simple linear factors will continue having an edge or not in the future. If you think not, why not just remove them all before hand so your model doesn’t learn them?

Right. So I understand we don’t want to be suckered by the easy lure of superficial linear correlations that may be fleeting. But, do we really have hard evidence that deeper features are necessarily more robust? After all, by the very fact that they are more complex (at least given the dataset with the features we have), involving interactions between features – couldn’t it be that they could be quite brittle if those interactions don’t hold up era-to-era?

Undoubtedly some of the linear features that do great in specific eras are just lucky/random and should not be relied upon (I think that’s been proven by you and it has been proven by me in my own testing), and it makes sense to remove the gravitational pull of those when making models (which I already do in my methods although I don’t totally eliminate linearity). But as most of us know, modern techniques beyond simple parametric models with find a “signal” in anything even if it isn’t there, linear or not. So while I think this will be very interesting and useful, getting rid of linearity in and of itself will not prevent overfitting or possible reliance on fleeting/fickle factors – it may even cause more of it. So there are going to be some new gotchas there I bet.

(None of this is meant as criticism, just musing.)

This is a really good observation. And the answer is that the new feature-neutral idea is what we “want”.
Originally I was thinking about it as a sort of “portfolio concentration” concept, where the exposure metric makes sense. I think what we’ll likely do is change that metric to instead show feature-neutral validation score (or maybe just keep both).

Yes I totally agree with you on all of this. “Removing the gravitational pull” is a really good way to describe it too.

If I am not mistaken, the square root of the sum of the squares of the correlations would work as a feature exposure metric that does not have that problem.

A slightly cooler metric would be the square root of the mean of the squares of the feature correlations because it has a maximum value of one and then it is equal in standing to the target correlation itself (in losses).

This is definitely not a strong evidence that “deeper features are necessarily more robust”, but in my case complete removing of linear feature factors make predictions much more stable in terms of higher sharp and no negative correlations across the all testing eras (see the attached Figure) 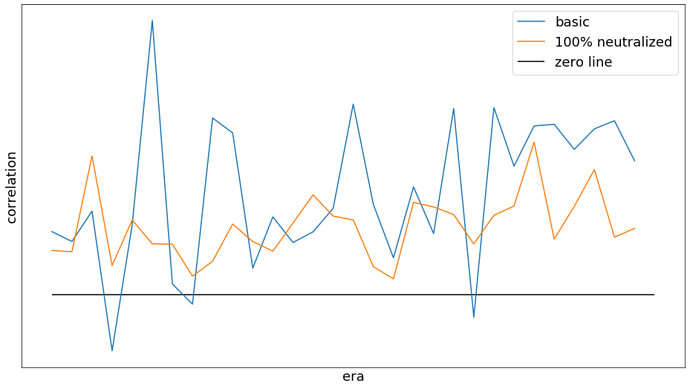 What is the metric you are using to determine the feature neutralization? Standard deviation, norm of the feature correlation vector (see above), or something else? It would be interesting to know the values of each of those metrics for both curves.

I just want to clarify that I did not used any feature neutral targets for the model training. All I’ve done - my standard training using standard targets (base model). And after that I used normalize_and_neutralize from the analysis_and_tips with proportion=1.0 for my predictions grouped by era (that is what I call 100% neutralized).

To be sure that I got your question I’m attaching code for feature correlation calculation.

neutralize predictions after the fact – interesting

I like the idea of payments based on MMC values and it can really diversify the pool of submissions and increase metamodel performance. But current implementation can have actually the opposite effect. There are basically two type of models which can get high MMC: highly correlated with metamodel and with higher performance, and weakly correlated with metamodel but with lower perfromance. The former one can really utilize assumption that “Due to the increased stability (lower volatility/risk) of MMC, multiplying profits/losses by 2 brings the risk/reward in-line with the primary tournament for the average user”. However, the latter one may have higher volatility of MMC. For example, models which have less dropdowns and higher sharpe than metamodel with same average correlation probably will get average MMC close to 0 with crazy volatility (high positive MMC during bad times for metamodel and high negative MMC during good time). But from the logical point of view, these type of models are better than metamodel itself (Who doesn’t want to increase Sharpe for no cost of correlation). Old payout system based on correlation also didn’t encorage that kind of models, but at least didn’t worse (You just the the same payout at the end but with smooth payout curve). So, I’m worrying that if correlation based payout will be turned off it hurts the metamodel.
And even more, there should be some both sharpe and correlation considered in the payout as the second option, opposite to MMC based payout. But probably, if the correlation sharpe will somehow be involved in MMC calculation rather than just correlation, that can be enough to keep only one payout option.

Hope my mumbling does make sense to anyone)

As you @jackerparker, I have some concerns regarding MMC.
If we have a model that constantly beats the metamodel, there is probably no real need to have a metamodel… What I would expect from a model with good MMC is that it performs significantly better than the metamodel during periods where it is difficult to get good predictions from the dataset, and performs well but less well than the metamodel during easy periods.
The problem here is that integration_test performs very well overall, so these easy periods probably happen very often. Therefore the reward of such a model is probably relatively low when using MMC.
I believe it would make sense to be rewarded more during difficult periods. If we apply a reasonable coefficient to MMC during difficult eras, it should still be quite difficult to game, no? I haven’t checked, but let’s suppose that 60% of live eras are easy ones and 40% difficult ones. If we apply a coefficient of 1.5 to difficult eras, a 1-p model wouldn’t make any money (it is a bit simplified, it has to be checked in details, but in that example, with a lower coefficient such as 1.3 we would probably be on the safe side).
What do you think?

Just a side note: I think that at the moment, thanks to the new data, it will be possible for a few weeks
(or even months) to get a MMC that outperforms the metamodel very often. But it will probably only last until everybody update their models.

@v1nc3n7 Thanks for raising this topic on the chat! The only concern I have about your proposal - it requires definition of “hard times” and an additional empirical coefficient, what makes MMC calculation and prediction more complicated. On the other hand using Sharpe (or Sortino) will also help in the issue you described and it is more simple to implement and to analyse

@jackerparker “hard times” can be defined very easily, for example it could simply be when the metamodel has a negative correlation. A reasonable coefficient could be defined by choosing a period of time (typically 20 eras, but could be different), and checking what is the ratio of positive eras over negative eras for integration_test during this period of time (we could take the average or something different). That wouldn’t really make the computation of MMC more complicated, it would be just multiplying the result by a coefficient. And anyway, we cannot even compute MMC by ourselves, only Numerai can, that would be very easy for them to implement.

The big advantage of Sharpe or Sortino compared to MMC is that indeed it is a measure we can compute ourselves, so it is easier to analyse. The disadvantage is that like with the current bonus, it requires the users to not miss any submission for a long period of time. It is particularly not friendly for new users. Furthermore we could expect the metamodel to have already a very high Sharpe ratio that would be very difficult to beat.

I think the idea behind MMC is that they want us to be able to provide models that improve the metamodel during tricky eras, even if our model is just average on the remaining eras (our model shouldn’t be bad either, else it would be too easy to reach this result). Since Numerai is combining a big number of models, they probably don’t particularly need that our models perform very well all the time.

hi @jackerparker not sure I totally understand but here’s my feeling on MMC.

if a user submits a model that’s strongly correlated with the meta model but better then they get MMC and that’s a good thing.