When using the diagnostics page you end up with some insights about the model provided you trained your model only on the vanilla train set. While they certainly may give good feedback about your model quality (apart from TC, but lets not dive into that), what I always found lacking is that they are metrics useful from the viewpoint of Numerai, but not from the viewpoint of a tournament participant.

Since the only metric that we are able to back-test AND stake on right now is CORR, I will assume that the participant will stake on CORR only.

As a benchmark, I compare it to the example predictions over the same period, and also to random predictions. Here is such a result from one of my latest models: 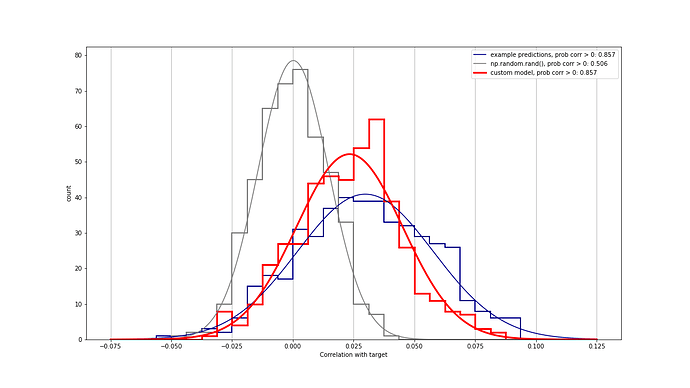 This result tells me, under the assumption that future eras behave similar to the ones in the validation set, in ~85 % of the weekly eras my model should receive positive correlation, which also is comparable to the example predictions.

If you’re assuming your correlation follows a gaussian, then your negative corr probability is a function of your sharpe ratio.

Yes, but at least for me sharpe ratio is less intuitive than the probability of receiving positive results per round.