Fun Fact: Did you know that the Rnumerai package on CRAN has been downloaded over 23,000 times?

Since its debut in 2017, it has received some solid praise, adoption and appreciation. 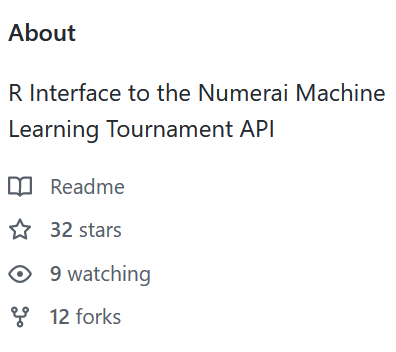 Problem: Despite its darling status among R tournament participants, RNumerai is in need of some serious love. It hasn’t had a substantial rewrite in nearly 5 years.

…and “the streets” are begging for a new version…

Proposal: The Omni Analytics team will do a complete rewrite of the RNumerai package to better support automated model submission and return the package to its former glory. This will include code refactoring, improved documentation and the incorporation of the new model assessment metrics into the package.

Deliverable: A fully updated and functioning package hosted on both Github and CRAN.

We look forward to getting back to supporting the Numerai community!

Sounds great! One issue though is that through the equal funding rate optimization proposal, the hourly rate is fixed at 50$ USD per hour of work. If that sounds good with you we should be good to go. Its an upvote from me

That’s a bummer about the hourly rate considering we were already being really nice with our estimate. How about this as a compromise… We’ll work with the fixed rate set, but the CoE just pays 100% of the project upfront (now $2,500). I don’t see this as a problem considering we all know each other and we’ve supported the package for years with not much compensation. I think that’s a fair compromise. Does that work?

Im fine with it but we can wait a couple days to get input from the rest of the CoE. Yah sorry about the fixed rate. Here is the reference to why the fixed rate: [Amendment] NumerBay Funding Rate Equalization.

Overview: The CoE has settled on a base rate of $50 an hour for project funding, keeping the review and approval process free from rate negotiations and value calculations. Problem: Not all projects are created equal, and some will deliver more value than others. Proposal: Create a retroactive bonus payment that recognizes exceptional work and value. Details: At any time in a project’s lifecycle, the CoE, members of the community, or the project owner can propose bonus pay for a project or proj…

So is this re-write happening?! If so, when will it start? I’m keen to add some functions that I use for my own work which don’t exist in the package today. Will you be making updates in the RNumerai Github repo? Or somewhere else? Thanks!

We’re waiting to hear back from the CoE. They have all the power

We are good to give you guys the whole thing and have you start now. Send address you would like 2500$ worth of NMR sent