While training one of my models by expanding time series cross validation, a random thought popped into my head:

How can I go around this? Is this even an issue? Until now I always used the model from the last fold.

The data in the training set contains overlapping rounds!!!

When you train on the first 100 eras, you shouldn’t use eras 101-104 for testing, because in real life they are not available.

eration from the live data.

How can I go around this? Is this even an issue? Until now I

Hi,
You should see CV and Training as two separate steps. You may want to use CV (like through cross_val_score in sklearn) to get a sense of the model future performance (if you don’t use the CV data for model tuning) but then you can train the model on the full dataset so you don’t “waste” any data.

You should see CV and Training as two separate steps

I guess my problem boils down to this misunderstanding, will read again on CV

You don’t have to use the last model of the fold. You can just train a new model on the latest data (obviously without a test set) which would match your CV expanding window strategy. One thing I have found helpful is to not just look at a short test window (in your example 10 eras) but rather all the available data as you walk forward. It gives you a better since for how the model performs as market regimes change over time. Expanding does appear to be better performing than fixed window. Here’s an example of a simple model I was testing where you see the mean and sharpe for the entire test data set but also the first 20 and last 20 as you walk forward: 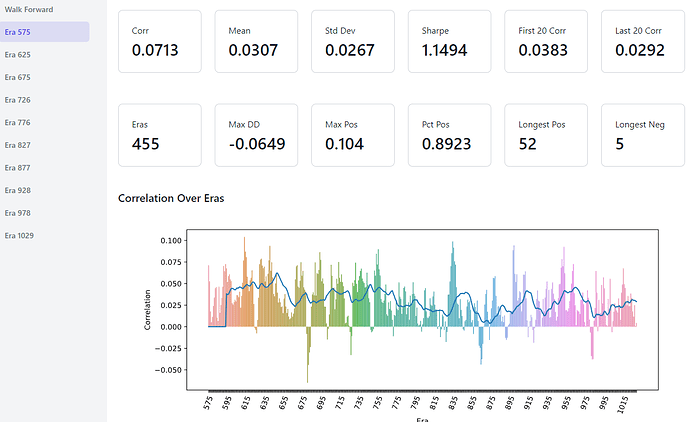