Hello! My name is Jon Taylor, and you may know me as Arbitrage.

I have a proposal for you to consider, but first, a little background.

Ethics disclosure: I am a voting member of the Council of Elders. I would abstain from voting on or executing transactions for this proposal. Approval would require four of six CoE members voting in favor.

In June of 2019, I visited San Francisco for an academic conference. During my stay, I met with the Numerai team, and Richard Craib separately, and pitched an idea to bring Numerai into the classroom. My passion is helping people learn about coding and finance, and new user onboarding wasn’t a primary focus at the time. We came to an agreement and thus began my paid contract work with Numerai.

Along the way, some things changed (COVID-19) and my focus shifted slightly. Rather than Numerai in the classroom, I suggested that we do an “Office Hours with Arbitrage” (OHwA) to give people a chance to talk about what they are working on and to ask questions on Zoom. I did weekly streams for many months and covered many interesting and diverse topics, interviewing team members and participants along the way.

Lockdowns across the globe forced many to stay home. I noticed that many users were all active around the time of daily scores, so I proposed a new way to conduct community outreach and to foster user retention: Daily Scores and Chill (DSC).

There’s one problem with OHwA, and that is the inability to talk about certain topics given that Numerai is funding and hosting the videos on their official channels. DSC is not hosted “officially” but is funded by Numerai, so we are able to discuss topics of interest that we cannot otherwise talk about on OHwA. This brings me to my proposal.

I would like the Council of Elders to fund my work to help onboard new users and to replace Numerai as the “sponsor” for my Twitch streams, including “Office Hours with Arbitrage.”

Below I present the proposal in the format suggested by JRB.

I would add branding and messaging to the streams to show that the Numerai Council of Elders is the official “sponsor”, and I could mention that in the open or close of each stream. The Council could (maybe?) create a Youtube account to host the OHwA and special feature videos which could (maybe?) allow for a broader discussion of topics that previously could not be discussed.

Thank you, and I will happily answer any questions you may have.

I love this. You do so much work to keep things tight within the community and it makes a lot of sense to have it pulled officially from Numerai funding and make it a part of the CoE sponsorship. This way, no topics can go unheard and you will have a lot more free rein on content. Lets do this! Also wanted to have side vote that @jeremy_berros CoE coin logo be the official sponsor logo on the steams if he approves as well

also, if the CoE funds it, then the community has far more say about content and start/end times! Want me to shift DSC to a different time? Done! OHwA on Saturday? OK! More about signals? Sure! Less about Feature Neutralization? Fine with me!

I can add any image to the header/footer in OBS, and the CoE Coin design is a good suggestion should it be formally adopted.

I approve this message @aventurine

Let me know if you guys want to see some more visual contents.

P.S.: I can also turn it into a rotating coin GIF

Please bring back DSC, life is boring without it.

Here are some of the stats available per stream. These statistics come from today’s (7/20/21) stream. 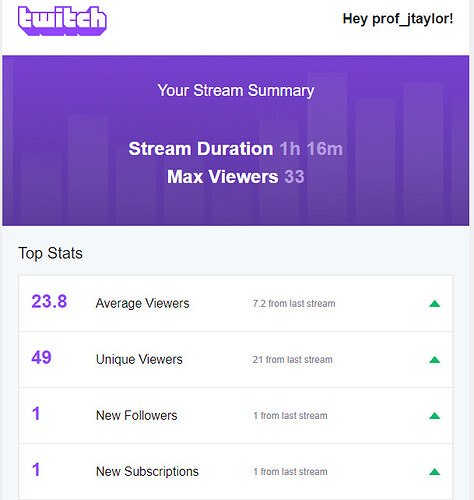 it isn’t an hour here or there, though. It is a major 15+ hour weekly commitment. I’d ask that you re-read the whole portion on compensation and consider the prep times as well. I don’t sit down, click stream, and then click end stream; there’s a tremendous amount of work behind the scenes. You don’t know that unless I tell you, so definitely a fair comment without the additional information. In order for me to have relevant discussion topics, I have to stay on top of all things Numerai (medium posts, Rocket Chat, Telegram, Reddit posts, Twitter, Forum posts, news topics, etc) and that is all part of the prep. OHwA takes longer because I have to coordinate with guests, answer their questions, assist with technology (first-timers always have microphone issues LOL) and other things that, again, if I didn’t tell you, you’d never know about, so all of what you said is fair without additional knowledge.

There’s also quite the upfront expense for equipment (quality microphone and camera, green screen, lighting, etc.), but I made that investment already, giving me zero friction to get started.

I chose 120 NMR precisely because it was approximately $3,000 a month. I have zero issues fixing compensation at a fiat equivalency.

I am abstaining from commenting on the broader CoE bullets because ethics.

All good feedback! thank you @objectscience

It could make sense to split this in two proposals. In it’s current form, I am yes for OHwA and no on DSC.

Could you illustrate some topics specifically the current Numerai sponsorship prohibits you from discussing? I think this content distinction is key to the value add from your proposal. Thanks!

I can’t ‘promote’ NMR or discuss price, trading, risks, etc. You’ll notice that on all of the recordings, I never ask about the token or profitability or topics of that nature. Some previous interviews even have major edits where huge chunks of time are omitted; this is because my guest ventured into topics we shouldn’t but I try to be nice and not stop them. I know we’ll just cut it out anyway so I try to keep continuity while in the middle of the interview.

Let’s address the fact that as participants and stakeholders, token risk is likely our biggest risk, yet there’s scant discussion on it. Let’s fix that.

Let’s also address the fact that we need a constant flow of new users/speculators/participants and a consistent social media/streaming presence helps a lot with this. I wish I had a way to identify which users came directly from Twitch, or who relied on the streams to learn more about the tournament before staking, but I have no way to track those statistics.

Anyone willing to provide some anecdotes on how my videos, discussions and streams have helped you in the tournament? Maybe that would also support the proposal.

Does the impending 506(c) classification alleviate those constraints?

I agree these topics are critical to retaining participation. Demand streams for the token has been a pressing issue for me, but I think the effort is best spent with institutions, both internal (Numerai and current VCs) and external (MLDP funds).

I don’t think that the 506(c) classification changes anything about the token but it would give the team flexibility to talk about the hedge fund. We must all remember that they are separate things for legal purposes. We certainly don’t want NMR to be classified as a security!

Which is why I suggested obtaining a legal opinion on this very issue, and specifically how the treasury level dictates this security classification. How then will Numerai purchase tokens after treasury is depleted if deemed a security from said purchases?

If is not a legal issue whereby Numerai purchases will classify the token as a security, and 506(c) transition is complete, then all bottlenecks are removed for your discussion points.

Again I think your proposal is overall net positive, but pales in comparison to sourcing the institutions with the same limited CoE resources (actually shouldn’t even be a CoE discussion when in fact this function is currently under the purview of Numerai’s marketing department).

@arbitrage , I completely agree with you that token risk is the greatest single issue facing participants. But it is discussed on rocketchat and it has been discussed here in the forum and the need for that discussion seems independent of your need to get paid for your broadcasts. For instance, here and on rocketchat you seem to have largely avoided these discussions. My point by that statement is that I don’t have any evidence that your right now naming this persistent and critical problem as a topic for DSC will help us to find a solution for it. Why not make proposals here in the forum, like @of_s has, to directly solve it? I also agree with all of @objectscience’s bullet points, especially given the unknown value of your planned contributions. I would prefer to see the broader strategy of the CoE fleshed out first.

Anyone willing to provide some anecdotes on how my videos, discussions and streams have helped you in the tournament

DSC was what kept me engaged with the community from day one of my participation. I’ve learned a lot in a short time about everything Numerai including some modeling techniques helpful for the tournament as well as related finance topics from the DSC and OHwA live discussions and Q&As. Without those it may have taken me months more to get started. Just my personal experience.

you are assigning value to a minor point in my post. More importantly, a stable and constant presence for new users to follow and a platform for discussion of new topics, including token risk, is a central part of the proposal.

I think what people are trying to get their heads around is, is it worth $46 an hour, on an ongoing basis, for you to read Twitter and Rocket Chat and then discuss scores for another hour.

We’ve asked questions, you’ve given answers, and based on the poll it looks like the value answer is “yes”, so I think the process is working. When it closes the CoE can review it and vote.

I think this was a pretty good example of how this can work IF community feedback is important. Maybe it isn’t, maybe we’re all overthinking the process.

I’ve had to think about what @chanes said last night and what @richai said towards the end of the first CoE vid. and it seems like the company would prefer to error on the side of rapid development. We may be engaging in way more oversight, trying to do the right thing, then they are interested it.

Put differently, it may be the companies deep desire right now to foster an explosion of development, not a trickle.

Maybe, instead of stress testing every proposal for value, we should stress test their willingness to spend $$.

How specifically does CoE funding indemnify Numerai from violating the purported securities violations? The arms length transaction and funding doesn’t seem like a legal moat for discussing these topics…

Again, a thorough legal interpretation would go a long way in providing an operating baseline.