Some info on multiple targets?

I didn’t find much information (nothing at all) regarding the multiple targets in the official documentation. I would like to know in which way they differ (except the 20 vs 60 days difference, which is clear). Does anybody know something on this topic? Thanks.

Nobody knows! They are neutralized to different things and some such is about all the explanation we’ve gotten. Testing shows that at least several of them are pretty useful though.

you might come out your own assumption and test whether it aligned with the target they provided. let’s say market moving up more than 1% with 0.75 and move down 1% with 0.25.

This post made me curious and so here is the correlation matrix between targets and the dendrogram to better highlight relationships. 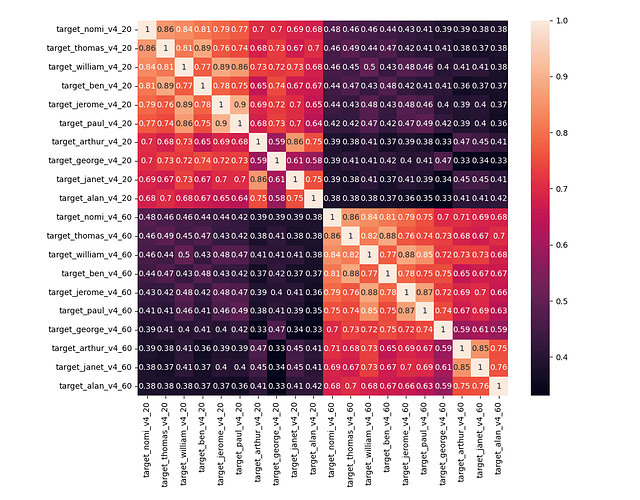 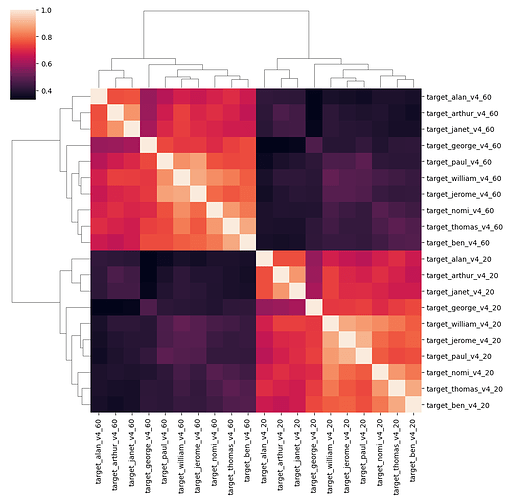 Here is the code.

Sorry, it could be a basic question but I don’t understand why there are multiple targets…
When doing training and prediction, we need to choose a target.

For example, the example code chooses a “target_nomi_v4_20”.

But I don’t understand why “target_nomi_v4_20” is chosen.
How could it be selected? Is there any rule or a criteria?

Yes, it is very confusing…
But now I understood it. I will play with those targets.
Thank you very much.

Sorry, but still I don’t understand the targets.
Targets consists of the limited sets of discrete numbers.
So I will use classifier not regresser for predictions.
But then some targets(target_brabra) don’t have the value in the target.

And the targets are in buckets just like the features (except the distributions are different). In most cases you’ll find a regression approach working better – at least for getting correlation. (Your submission should be real-valued – not just the 5 buckets. We are scored on ranking/ordering, not actual values.)

It should be pointed out that TC evaluation is based on portfolio returns of your model vs others and so kinda doesn’t have a fixed target. Another reason to mix it up.

@wigglemuse
Thank you very much for the information and advice.
I completely understand it.

In most cases you’ll find a regression approach working better – at least for getting correlation. (Your submission should be real-valued – not just the 5 buckets. We are scored on ranking/ordering, not actual values.)

I agree with you.

@ryo_matsuzaka Just to make your life easier, train your model multiple times, each time with a different target. Then create one model slot in your numer.ai account for each target so that you can submit the predictions coming from models trained on different targets to different slot. Then observe which target gives you better results and stake on it.