The new data has both more features and more eras. There are now 1050 features instead of 310, and a total of 679 training and validation eras with targets provided instead of 142.

The eras are now weekly instead of monthly. This means that eras match the tournament more precisely, however they are now “overlapping”. This means that nearby eras are correlated with one another because their targets are generated from stock market performance from a shared, or “overlapping”, period of time. 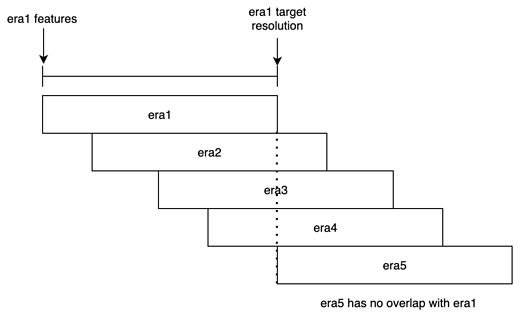 The new “training” period covers the same time period as eras #1-132 in the old data, but is now weekly rather than monthly.

The new “validation” period covers the same time period as eras #197-212 in the old data plus an additional time period, and is now weekly rather than monthly.

The final major change is that there are now many different targets in the dataset. The tournament target, which is the one you are scored on, is always called “target”. Currently “target” corresponds to “target_nomi_20”, but this may change in the future. However you will also find 20 more targets which are not scored on, but you may find useful for training. The 20 targets consist of 10 different types of targets constructed using 2 different time periods, 20 and 60 days. Additional targets may also be added in the future.

Be aware that some of the new targets have different binning distributions than what you see with Nomi, i.e. 7 bins rather than 5, with less rigid constraints on samples per bin. Training models to be good at multiple targets and/or ensembling models trained on different targets is a great way to improve generalization performance and increase the uniqueness of your model.

The new targets are regularized in different ways and exhibit a range of correlations with each other from around ~0.3 to ~0.9. Due to this regularization you may find that models trained on some of the new targets generalize to predict “target” better than models trained on “target”. Other targets may yield models that appear to generalize poorly to “target” but end up helping in an ensemble.

Finally, be careful about just selecting a target that does well on Validation. Target selection is yet another way to overfit. When in doubt, cross-validate!

The new data can be accessed either through the “Download Data” button in the leaderboard sidebar or through s3 links returned by the dataset API using the filename argument; a list of valid filenames can be retrieved through the new list_datasets API query. The new training_data and validation_data files will be the same every week, while the tournament_data file will be updated with the latest live era. Parquet and CSV versions of these files will be available at the start of the round each Saturday; you may retrieve data for past rounds using the round argument of the dataset and list_datasets APIs.

Version 2 of the endpoint is now used by the website when you press “Upload Predictions”. This means that predictions made using the old data will not be accepted via the Numerai website, you will instead have to set version to 1 in create_submission to upload predictions on the old data.

All of these new API features can be used via the GraphQL API, or through NumerAPI.

The most important thing about the new data is that it helps models predict the targets more accurately! 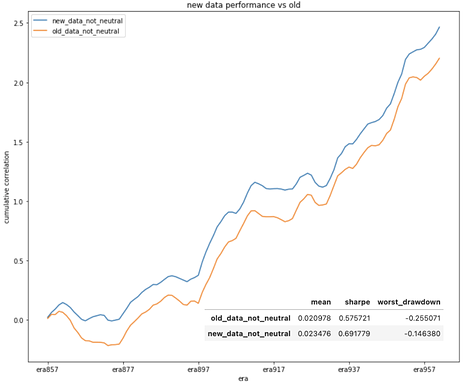 Here’s a comparison of two large XGBoost models, one built on the old data and one on the new data, and tested on the validation period.

One interesting thing is how a feature-neutral model looks. With so many more features to neutralize to, it actually hurts the mean score, but dramatically improves the consistency and Sharpe - the worst drawdown is only -0.7%! 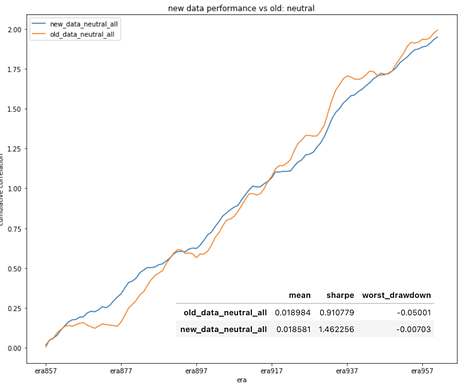 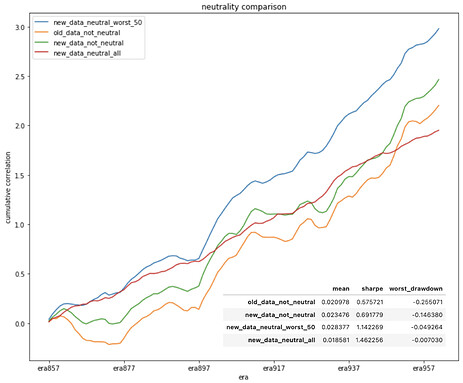 This simple modeling improvement shows the power of having so many more features. With this model, the mean goes all the way up to 0.0284, the Sharpe up to 1.142, and the worst drawdown only -4.93%. 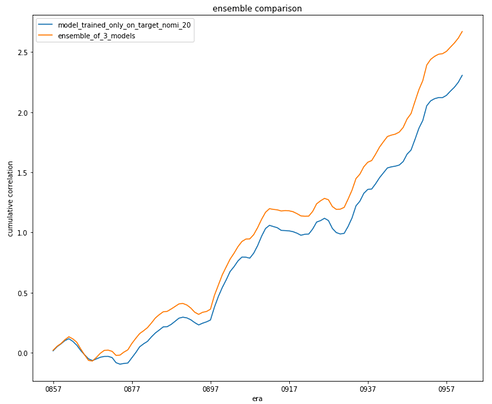 Details on the techniques above can be found in the example scripts repo, which has been updated with:

Updates:
There has been lots of concern about comparing old models to new models, as well as general difficulty with data size. There have been a few updates to address these:

There are a couple of other long-term considerations that we need users to begin preparing for.

More data may be added from time to time. These releases will always be announced, but it still has some effect on automation. We haven’t added new features often before now, but we want to be able to add new features regularly without it causing hiccups for users.

For example, simply getting all columns that start with “feature_” won’t work, as your model will receive unexpected columns (unless you are retraining). So your scripts should be explicit about which columns you want to use in order to ensure that they are always able to run even when new data is added. The new example script considers this already.

Features may be unavailable in some weeks. We don’t expect this to happen any time with this current data, but as we add more and more features, it is inevitable that some week, one of the features won’t be available at all in time for the round start. We don’t want to hold up the entire tournament for one feature, so we may put out that feature with NaNs. The new example script will implement the simple practice of filling missing data with 0.5, which you are encouraged to copy or improve upon.

Of those 1050 features: are there 310 of them, which are identical to the legacy features?

In other words, if I “continue to use the old dataset in the same way”, does that correspond to using some subset of the 1050 features, and also some subset of “4x the number of rows”?

I’d like to use the same 310 columns, but more rows, especially validation rows. Please advise.

Sorry, but there is not a 1-to-1 mapping between the old features and new.

The legacy 310 wouldn’t be given for all the rows, only 1/4 or 1/5 of them… but that would have to include the live rows, or else the legacy modelers and new-data modelers couldn’t even be in the same tournament.

Nearly all the information of the old features is included in the new features plus a lot of new information. The old features were constructed in a way that wasn’t extensible and so a 1-to-1 mapping with the new system isn’t feasible.

Thanks for the release to you all at Numerai, huge effort and big ups for designing for future change!

Are there any plans to stop supplying the legacy style features? Rough timeframe?

Is the target unchanged? I read here it is nomi_20 today, was it nomi_20 last week?

@mic, I was asking so what similar questions over on RC, so a kind person posted this link: https://github.com/numerai/example-scripts/blob/master/analysis_and_tips.ipynb

The same file comes with the release, but if (like me) you don’t use Jupyter Notebook (whatever that is) it’s rather unreadable. The GitHub link otoh is relatively well presented.

FWIW, the target to submit on for the competition is still labelled target, and it looks much the same. There just also a bunch of other targets to play with.

The website’s “Upload Predictions” button will only work for predictions made on the new data. Submissions using the legacy data can still be made via the API

Don’t understand this point. I thought that legacy data and new data predict the same time interval so there should be not difference in the file format or id numbers. What are differences in submission file between legacy and new data?

I’m out. too much for my humble laptop. Any takers on a 3rd-hand laptop?

To train faster, you can drop 3/4ths of the rows (to turn the training data back into monthly instead of weekly).

Many good models can be built by downsampling like this.

Do you mean, go drop-drop-drop-keep, by eras? Or is it by rows?
And only train, or train and val?

Maybe a better idea: drop 4/5 of the columns (i.e. features). Looking at the plot in “Out[7]” of analysis_and_tips.ipynb, it looks like columns 0-209 are just repeated five times consecutively.

i like current numerai tournament. 2.5G data set is just nice for my current machine learning environment. Moving from 2.5G to 10G is over my current limit. I might put this journey on hold and more focus on signal which the data collect is still under my control.

I see big down side to this… since you need a lot more compute power… so you are basicly making it harder and harder to enter tournament.

I thought you want as much diversity as possible, but its starts to look more and more big guys taking all … hope you are also thinking in about problem like this.

You can always use just some of the data.

He means dropping 3/4ths of the eras (which will drop 3/4ths of the rows), e.g. training on eras 1,5,9…
You could make four such models with different starting points (e.g. using eras 2,6,10…, etc) and ensemble them. Heck you could combine that with your idea of using the each of the blocks of 210 features and make 20 models to ensemble. Each individual training would use less memory than the previous dataset and I’d bet such a thing would perform very well. There are lots of memory efficient ways to use all the data. I really don’t think anyone needs to upgrade their hardware unless they really need an excuse to

In the tournament data file, will the live eras be the only thing that changes week to week?

Yes, and as per the recent announcement in RocketChat you can now download only the live if you so choose, so you can easily generate live predictions to append to previously generated test predictions for upload. 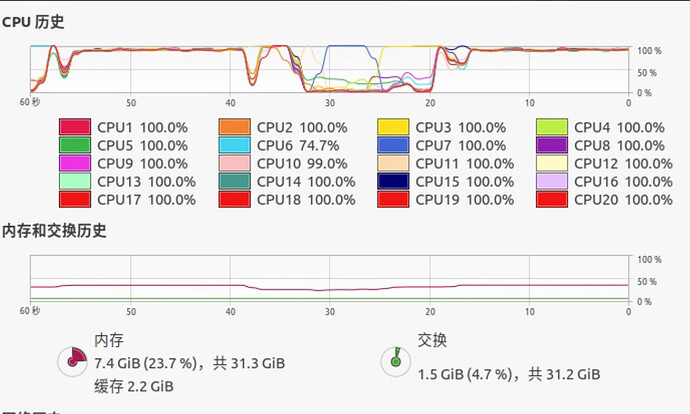 in order to get more people continue participating in the numer.ai tournament, may i request organizer to continue providing old data set as they did before ? BTW, providing a separate live data set for submission is a good idea and should continue.