Numerai is a crowdsourced hedgefund that hosts tournaments, which attract thousands of data scientists around the world to compete for Numeraire cryptocurrency. The company provides clean, regularized, and obfuscated data, where anyone with expertise in machine learning can freely participate. Other than that, they also include various guides and coding samples to help novice data scientists get started. One way to get the data is simply visit https://numer.ai/.

In this article, we will perform exploratory data analysis on the numerai_training_data.csv using R to find out more about each feature and the target. In a recent development, starting for round 238 opening on November 14th, 2020 the official target will migrate from “Kazutsugi” to the newer “Nomi”. In preparation for the migration, we’ll perform our analysis on the new Nomi target.

The training_data is 1.3 GB and contains information on 501808 rows across 314 columns. The first three columns are as follow:

These three columns are then followed by 310 features columns and the last column for the target. Our very first observation of the data is that all the feature columns and the target column take on only 5 numeric values: 0, 0.25, 0.5, 0.75, and 1. Below shows a sample of the first few columns and rows.

We see in the data that all the columns are in the correct format, the data is clean and ready for analysis. There are no missing value and from first glance, many of the features share similar distributions. Histograms of the actual values point to an almost universal uniform distribution across each variable, the distributions of the summary statistics appear to be either normally distributed or heavily skewed. 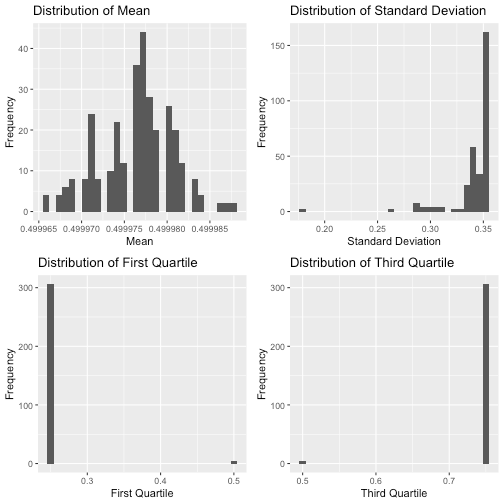 It seems that the mean and median of every feature are very close to 0.5. Most of the features have standard deviation around 0.35, while there are a few with exceptionally low standard deviations of less than 0.2. Almost all of the features have their first quartile and third quartile exactly on 0.25 and 0.75 respectfully. A few of them have first quartile and third quartile curiously at 0.50.

How do these distributions look for each feature category? Let’s find out: 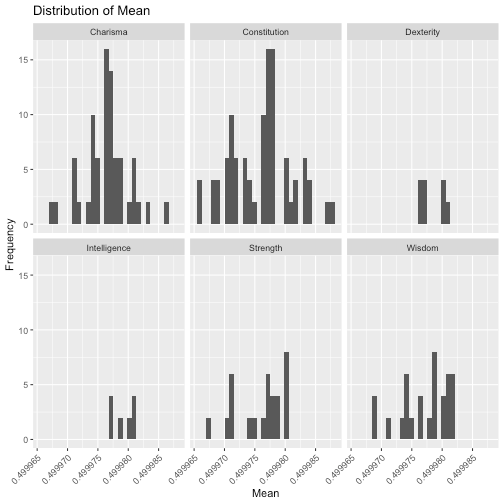 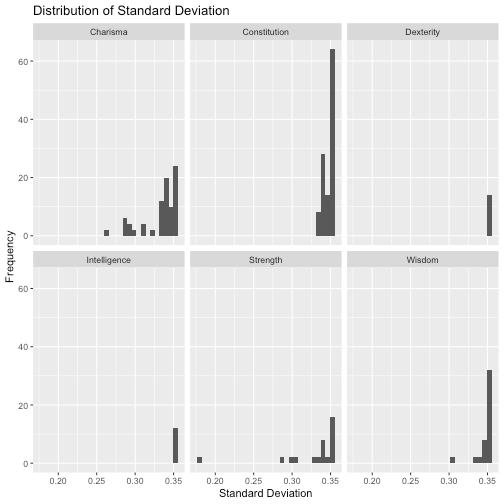 We note that outliers seem to appear in the “Strength” and “Charisma” categories. Let’s look more closely to find out which ones.

We can see that feature_strength20 and feature_strength38 are the ones that have the lowest standard deviation (almost half the norm). It is also very interesting that all of the outliers come from two categories: “Charisma” and “Strength”.

Though we have many features, they are all symmetrical and they look like one of the following types. 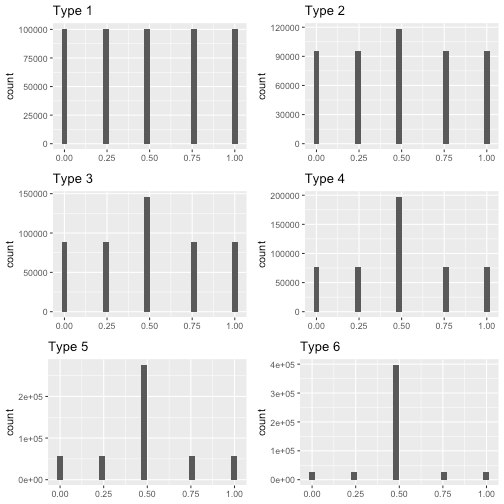 Type 1 is uniform distribution and Type 2 to Type 6 are simply various degrees of spread (measured by standard deviation) centered at 0.5. Note that Type 5 and Type 6 are the outliers we mentioned earlier.

We see that the two smallest categories: “Intelligence” and “Dexterity” all have Type 1. “Strength” and “Charisma” have a mix of almost all the types.

Here is a frequency table showing exactly how many of each category is of each Type.

How about the target value? Let’s take a look at it’s summary statistics:

The target does not belong to any of the aforementioned Types. The distribution looks like a normal distribution.

We now take a look at the correlations between the features. 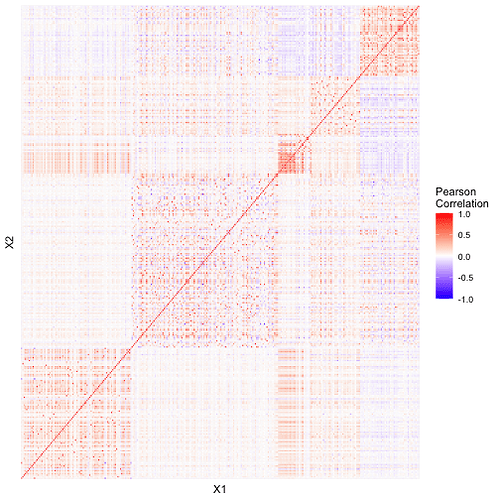 Though it is not easy to get much out of the heatmap, we can sort of see that features within each category, they are mostly correlated (some are negative correlated) with each other. 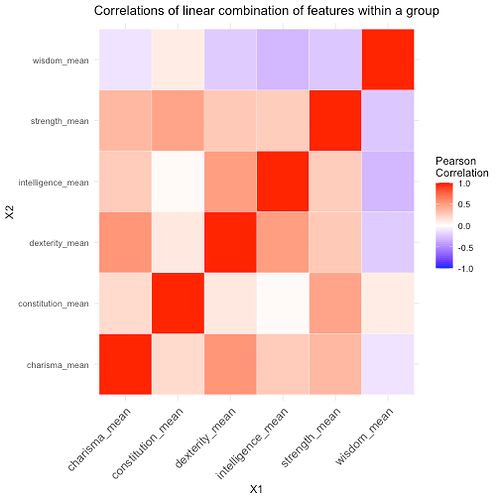 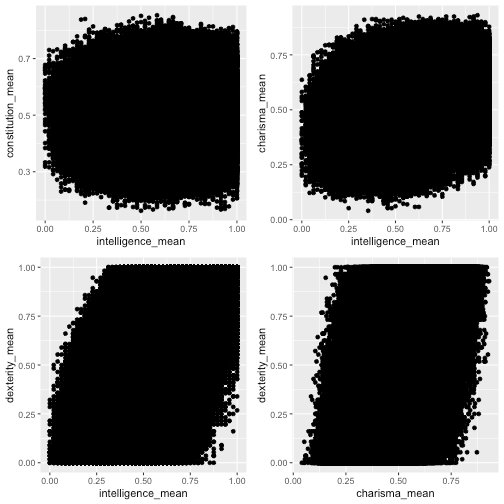 As expected, when we look at correlations between linear combinations of features and the target, we see that none of them are correlated with the target. 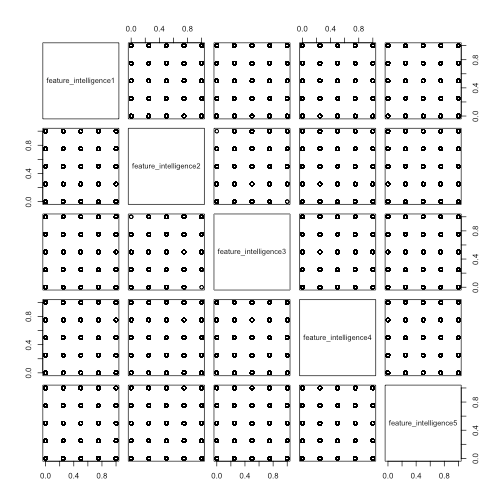 Let’s explore some mosaic plots. For instance, going back to the outlier we discussed, this mosaic plot shows that feature_strength20 are heavily centered at 0.5 while feature_intelligence1 is evenly distributed at each value. 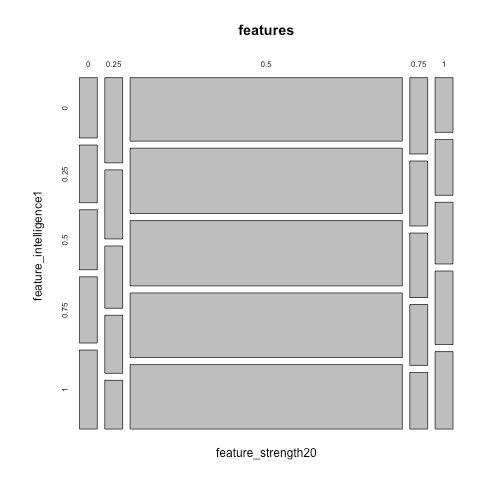 Here is another interesting mosaic plot where it clearly shows that there is a strong correlation between feature_intelligence10 and feature_dexterity1, which we have seen while we looked at correlations. 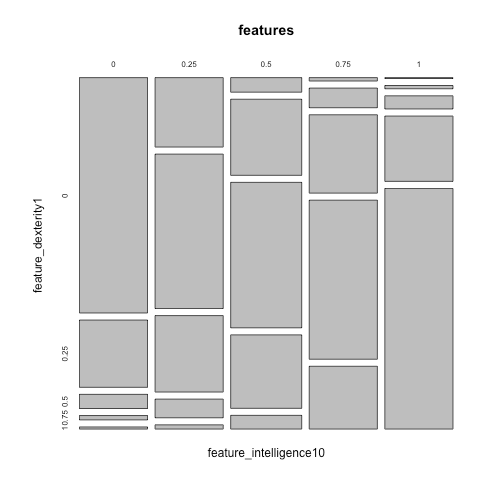 Here are two plots of PC1 vs PC2, where no clear clusters can be seen. Notice that similar situation occurs across the rest of the components as well. We can only conclude that the target value exists all across different inputs, which is unfortunate as it implies predicting the target could be a difficult task. 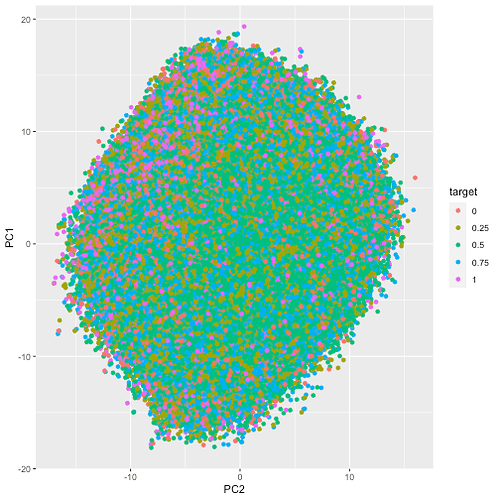 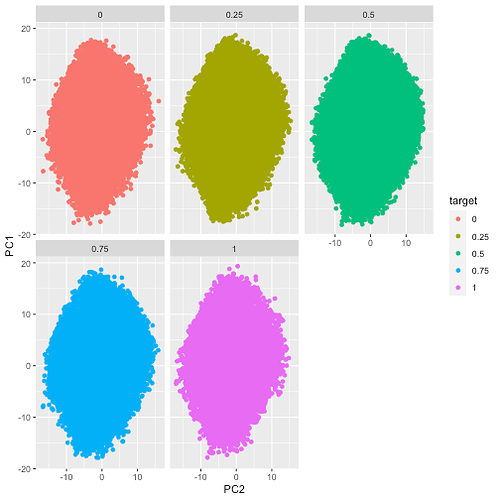 From the analysis, we found that many of the features are very similar to each other and even though there are 6 categories of features, there are no clear distinction between them. Here are some interesting things we found:

We also found that none of the features are correlated with the target, which was indeed very curious; however, when performing the same analysis across different eras we found trends that inspired our next post analyzing time dependencies in the dataset. We leave you with the following example of the correlation between feature_intelligence1 and the target across eras where we clearly see the relationship is a function of time. 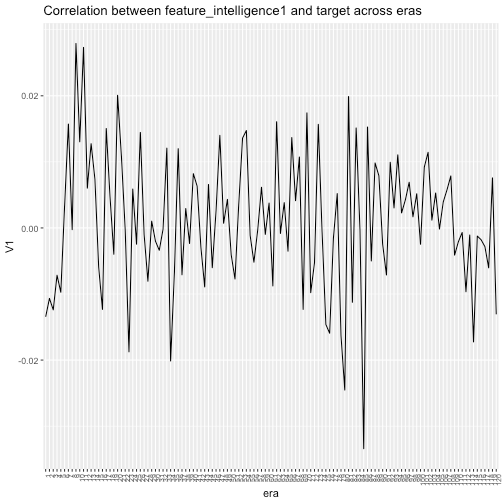